Any questions to me

I recently received inquiry from non-English speaking country. He noted that he was not good at English writing.
It is no problem to give me emails in European language other than English. We have translation tools in web site.
I can handle italiano and Deutsch a little bit. I will try.
Ciao!
Posted by MDOFCR at 5:19 PM No comments:

My presentation at RILSRT on 23rd September, 2010 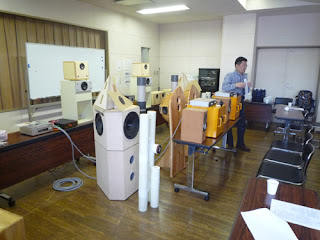 Here is myself. I presented three types of MDOF-CR(Multiple-Degree of Freedom Cavity Resonator) applications.

Three applications are:
1) Standard MCAP-CR
2) CBS-CR
3) AICC-CR
These are true MDOF-CR applications.
More detailed information is in Japanese only. I will upload them in English later. When? I am not sure.. 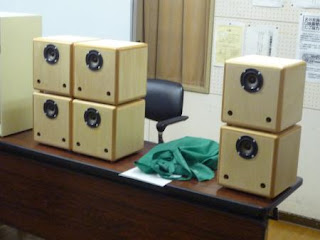 These applications have exactly the same appearances as in the left photographs.

These applications impressed the attendees because of powerful low frequency response with small 3" full-range drivers (TB W3-881SJ).
Posted by MDOFCR at 8:06 PM No comments: 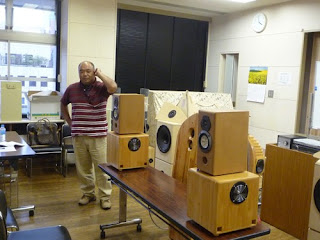 We have to always come back to basics. It was what his work let me know. 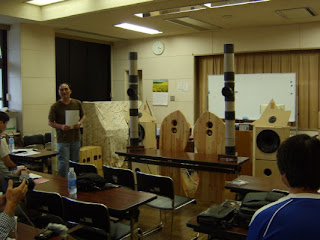 His system generated vivid sound. It was tuned to fit pops sound rather than classical musics.

Frequency range was wide enough from very low (40Hz and lower) to very high (may be 20kHz).

Posted by MDOFCR at 8:13 PM No comments:

Conference of Research Institute of Loudspeaker Systems and Related Technologies

I am heading a small group named "Research Institute of Loudspeaker Systems and Related Technologies(RILSRT)". First conference was held on September 23rd, 2010 in Tokyo. It was open conference to public and anyone who wanted to join was able to join the conference.
Twenty-six people came to present or just to audit the conference. 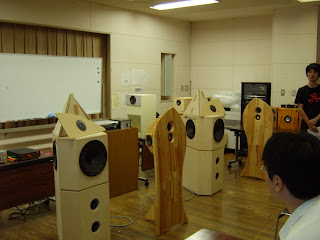 This is presentation by Mr. Matsu. He is co-founder of this institute.

This huge system is aimed to realize acoustic field using one 12" and two 10" full-range drivers for each channel. Its technology was based on NDR (Non-Dimensional Radiation) System developed by Mr. Kono in Japan. Enclosure type is standard MCAP-CR developed by myself..

Acoustic field was truly wondering. Regenerating chamber orchestra, acoustic field was spread not only forward field but also backward field. Size of violin was small enough and did not spread over while using these drivers. It was amazing work. Everyone who presented liked this system. Problem was that size was too big for personal residence. 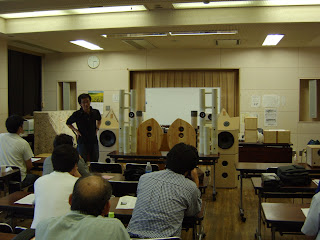 This was presentation by Mr. Kato. His work was white triple-pipe. He named this system "Twin-Tower". He used one 3" Tangband driver for each channel. Cabinet was made of mostly around 4" paper-pipe and some PVC pipe. Using 3" driver, this system regenerated powerful but soft low frequency sounds. Playing wood base CD, some ones sighed and told "I have never heard this base. It was really wonderful". This system did not cost much. Total cost excluding his labor was only 30 - 40 US dollar. Enclosure type was also MCAP-CR with four sub-chambers. 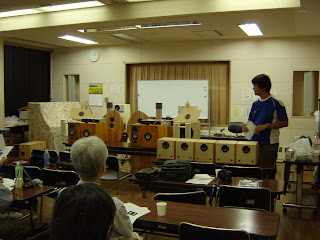 I thank Mr. Osawa for his presentation. He was not a member of RILSRT. He developed four-sub-chamber standard MCAP-CR system. His system was at the very center of left picture. His work was practical. He used easily available box components for enclosure and made this system cost effective. His driver was 4" Tangband full-range. He added super tweeter in order to compensate for higher frequency response. Low range was powerful enough. Cross sectional area of external ducts was smaller than my recommendation, still performed well. It proved design flexibility of MCAP-CRs.


Multiple-Degree of Freedom Cavity Resonator Project
Posted by MDOFCR at 2:46 PM No comments: 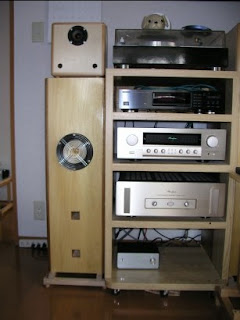 I packed some of my speaker systems in order to present at conference of Research Institute for Loudspeaker Systems and Related Trchnologies (RILSRT) held on 23rd of September, 2010.

I resumed using my main loudspeaker systems that are tall 5" system in the left photograph. The main system is named TR130c. This system is equipped with Nf5Exciter full-range driver by Feastrex. I again realized completely different world with Feastrex drivers from with Fostex drivers. Listening Jazz Piano Trio ("The Ground" by Tord Gustavsen Trio: ECM 1892 B0004123-02), I felt music itself rather than just high fidelity sound. This was true to Morzart' Violin Concerto, List's Piano Concerto and all other music sources that I own. Feastrex sound is music itself. High frequency sound directly reaches to me without distortion. Nothing is annoying. Thigh I enjoy piano trio with my "CON GIOIA" system with Fostex FE83En drivers, but not as much as with "TR130c" system with Feastrex Nf5Exciter drivers. I have to realize this difference between these driver models. Much expense for some is sometimes inevitable. I should not have known Feastrex drivers.
Some of details are discussed in this link.

Posted by MDOFCR at 9:21 AM No comments:

I am heading a small society named "Research Institute of Loudspeaker Systems and Related Technologies (see link).  It pursues developing and publishing useful technologies. There are many professional engineers and researchers worldwide; however, no professional has ever got success in multiple degree of freedom cavity resonator area. 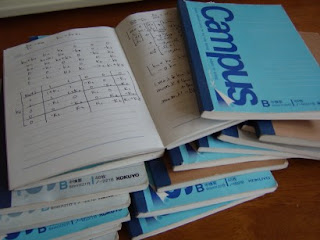 Above picture is my memorandum notebooks. I always bring a small notebook in order to record my ideas. I illustrate my multiple degree of freedom models and momentum equations. These notebooks are some of my records of MDOF-CR development. Idea of models, equations, algorithms and hand-written drawings are recorded in these notebooks.

I think audio professionals should lead technologies; however, non-professionals are already go ahead from professionals in some area. Therefore my group have reasons of its existence. 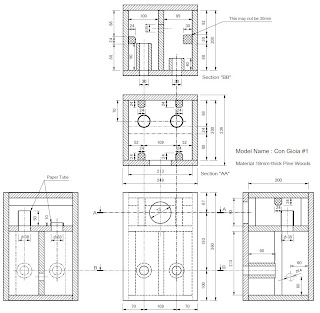 After making clay layer back side of FE83En's frame. Sound became clear. I am now able to show the drawing of this model.


Multiple-Degree of Freedom Cavity Resonator Project
Posted by MDOFCR at 10:54 PM No comments: 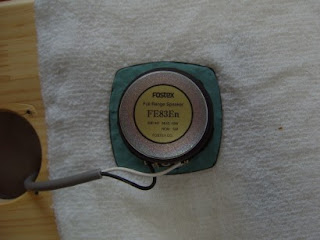 Posted by MDOFCR at 3:39 PM No comments: 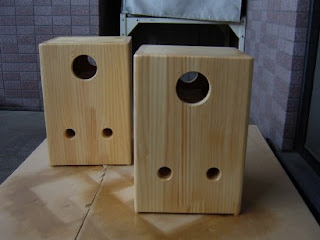 Cabinet of the system was painted yesterday. It was tougher work than I expected.  Finishing work is always the most tough part of loudspeaker system assembly.
It looks nicer than I expected. I learned about painting recently by commercial DIY video by Loudspeaker Meister Mr. Oyama. It is available in his website. His video is more than excellent than anything else. I wish I could have bought this twenty years ago. I should not have spend hundreds of euros, if I had had this video. 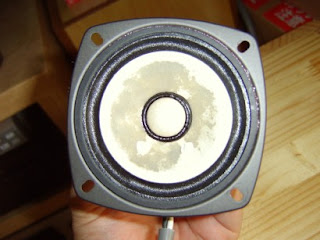 After finishing was done, I replaced speaker driver modified FE83E with FE83En, then I was disappointed at the sound. Therefore I made some modification to FE83En.

Appearance became different from FE83E. Painting from back side made dirty stain in the front side, while same painting material was used.

Sound after this modification was made, impresses me a lot. High frequency does not annoy me as original FE83En. Problem was that low frequency at 50Hz became too strong so that membrane hit limit and made noise; however it is not problem for home use.

I do not recommend any one to make same modification. It will spoil the speaker driver unless user love this result. 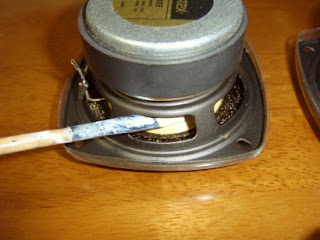 Modification of speaker driver was tested.
Original speaker driver was FE83En. Before making change to this FE83En, FE83E was modified in order to know if modification works well.
Purpose of this change was to make high frequency response lower and and to boost low frequency response.
What was done was to make painting layer to back side of membrane. Painting layer has effect to increase mass of membrane and to reinforce stiffness of membrane. Former one will make F0 lower, so that response of low frequency will be boosted. Later one will work to reduce high frequency response, because higher vibration mode will become higher because stiffness will increase.
I was not sure if there were any side effects. I am not Fostex sound lover, so that I decided to remodel Fostex original.
My impression follows:
As a result, this modification seems to work well to "me". Please do not copy this modification. Success is not guaranteed at all.
Posted by MDOFCR at 10:18 PM No comments:

Impression and tuning of the new model

This new model was designed to demonstrate at Muse-no-hakobune loudspeaker craft contest which will be held in November this year in Tokyo. I named this new model as "CON GIOIA". "CON GIOIA" is Italian words that mean "with joy".

I think the most important objective of speaker craft is to enjoy, so that new model was named "CON GIOIA".

Approximately three week has passed since CON GIOIA was assembled. It has wide frequency range. Low end frequency is around 50 Hz or even lower. This may be enough for Fostex's 3" driver FE83En. Response of 80Hz - 100Hz does not sound high enough to me, so that I made some change. 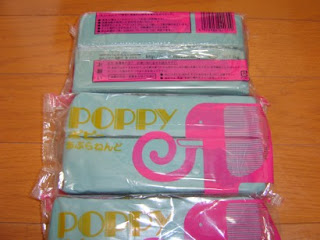 It did not make significant change. I will try some thing different later.
Posted by MDOFCR at 5:50 PM No comments: 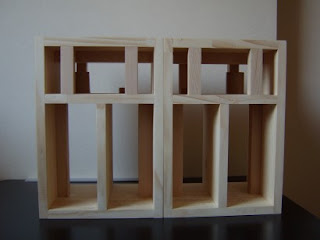 This is internal structure of the new MDOF-CR model. This model has main chamber and two sub-chambers. All the chambers are connected through ducts each other.

Number of degrees of freedom of ducts is five. Much more complex than double bass-reflex cabinets.

Some more information will be uploaded later.

I will soon have vacation, so we will see at the end of August.

See you on the Blog!

Give me email if you have any questions. My email address is "mcapspeakers @ gmail.com". Please remove two spaces from the email address both sides of "@".
Posted by MDOFCR at 6:50 PM No comments:

I have just begun Blog!

I have just begun Blogging my story of multiple degree of freedom cavity resonator (MDOF-CR) loudspeaker systems.
I manage web pages in the different place, but not frequently update them. I will write what some are interested in. 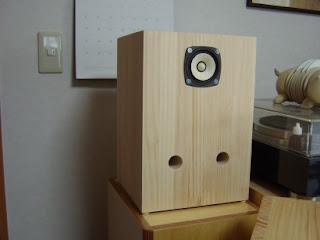 This is an application of MDOF-CR. I will later upload more details.

Best regards,
Posted by MDOFCR at 12:46 PM No comments: